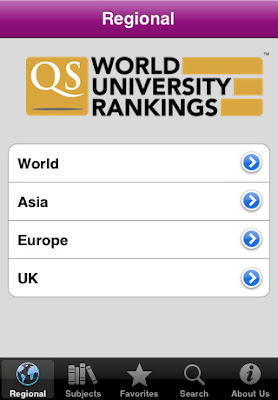 Finding the right university and course can be challenging sometimes and we often need help to separate the good from the bad, particularly if you're an Irish pupil looking to go abroad. Now there is a new app from QS World University Rankings which allows you quickly and easily see how your chosen university fares against the rest. The app is free to download for your iPhone or iPod and easily allows you see the newly released world rankings categorised by world, region and subject. There is detailed information on each of the top 50 universities world wide (including TCD, UCD, UL, DCU, UCC, NUI Galway, DIT and NUI Maynooth). You can link directly to the universities website and you can create a short-list of your favourite universities to keep for later. I'd recommend this to anyone sitting their Leaving Certificate this year and to Guidance Counsellors, especially is you are not too familiar with the UK institutions.
To download the QS University Rankings App click here.
Posted by Unknown at 9:59 AM No comments: 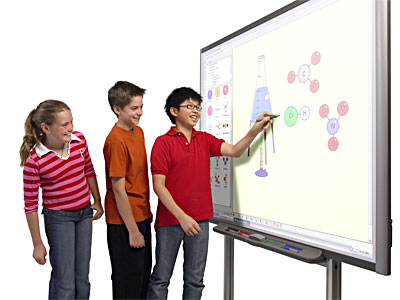 The much anticipated Digital Schools Week has arrived! At last! Well, actually, nobody knew it was taking place at all! But it's here anyway.
I believe it to be the brainchild of Minister for Communications, Energy and Natural Resources Eamon Ryan and the idea is a fine one. This could be a great opportunity to highlight the work of certain schools around the country on how they have integrated smart technology into their teaching methods. It is also a great opportunity to organise events around the country demonstrating these smart technologies to teachers. It is also a brilliant chance to promote the use of ICT in schools and maybe even launch a new government initiative for the promotion of smart technologies.
But unfortunately little of this seems to be happening. I only heard about it yesterday evening from Simon Lewis (from the brilliant Anseo.net) via Twitter, when he just found out about it. There is nothing in today's papers (correct me if I'm wrong) so I'm wondering what the purpose of the exercise is? One must also question the PR surrounding the non existent "event" as no one seems to know anything about it, especially teachers - who are undoubtedly the most significant factors in the incorporation of ICT in schools after state funding (I certainly hope no one got paid for it). However, Silicon Republic does have a website about the week long "event" with several articles on some of the schools that have successfully integrated smart technologies into their classrooms and quite a lot on government policy in the area. I've contacted Minister Ryan to find out more about the event and I await his reply. To be fair to him, he does seem passionate about the incorporation of such technologies into teaching and learning but this week seems to have been flung together last minute.
Innovative teaching and smart schools need more than just rhetoric - they need funding, support, training, hardware & software and this week could and should be focused on these, rather than the promotion of government policy.
Posted by Unknown at 1:04 PM 1 comment:

Guest Post - Are Exams Getting Easier? A Leaving Certificate Rant!

This guest post is written by fellow Frog Blogger Jeremy Stone. Jeremy explores grade inflation in the Leaving Cert and asks what really is the true purpose of our education system. 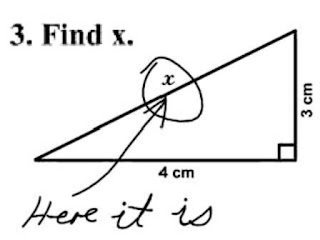 As a teacher, this has been the most successful year of my life - at least in terms of the exam success of my pupils (as was last year... and the year before that... and the year before that...). Indeed if we use overall exam performance as the arbiter of academic success then, each succeeding year, pupils all over the world must be working harder and harder, and must be getting increasingly more intelligent (perhaps it’s something in the water).
In the UK the A-Level pass rate rose in 2010 for the 18th year in a row, and overall GCSE results improved for the 23rd year running. In Ireland research by Martin O’Grady (of Tralee I.T.) compares Leaving Certificate grades in 1992 and 2006, and finds a very strong case for grade inflation. For each of the 24 comparable Higher Level subject exams there was an overall 55% increase in the percentage of A and B grades achieved in 2006 – compared with 1992. The level of A1s awarded overall increased by over 300% during the same period. The increases in achievement at Ordinary Level are even higher.
Read more »
Posted by Unknown at 7:32 PM No comments:

As the government look to make at least €3 Billion in savings in their December budget, through tax increases and a significant reduction in public spending, they must resist the urge to make any cuts in education and, if possible, look to increase funding in this sector. While potential cuts look like an easy option, they go against publicised government policy and could damage our economic recovery and international reputation.


Smart Economy
The government's economic and job creation plans are based around the development of a knowledge based "smart" economy, centred around the formation of jobs in science, engineering, manufacturing, as well as research  and development. To attain the ambitious goals outlined in their policy document, significant investment must be made in education, particularly in secondary education (science and maths), third level (university sector) and in continued education and training (ideally through some other organisation instead of FÁS). The government's own policy document on the formation of the smart economy states that "Ireland is already laying the foundations of the ideas economy by investing significantly in education". However, the recent OECD report contradicts their assertions.
OECD Report
The recently published OECD annual "Education at a Glance" report suggests that in 2007 Ireland was spending just 4.7% of its income on education, placing us 30th out of the 33 OECD countries. The average spend was 5.7%. The report also shows that from 1995 to 2007 the proportion of GDP that went to education in Ireland fell by half a percentage point and, at the height of the boom, Ireland was spending significantly less of a proportion of its income on education compared to other OECD countries. The most significant disparity occured in the third level sector, with Ireland only spending 1.2% of income in this area, 0.3% below the average. The report continued to pluck holes in the governments retoric - Irish class sizes are amongst the highest in the OECD and second highest in the EU and that 39% of Irish teachers receive no evaluation on work performance, the highest of all OECD countries. (For the full report, click here.) Of course, the report does not include the dramatic cuts in education seen in last year's budget, which saw funding for free books for poor children withdrawn in 90% of schools, equipment and resource grants for resource teachers working with special needs children abolished, funding of €4.3m for Traveller children slashed, €2.1m gone from school library grants and pupil teacher ratios increase across all schools. So government policy and action clearly don't match up. These facts highlight that we need to increase funding in education in Ireland, and most certainly not make further cuts.
Read more »
Posted by Unknown at 11:25 PM No comments: 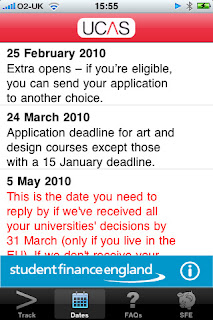 For pupils applying to the UK for a university place it might seem that all their time is taken up with the exhausting process that is a UCAS application. Waiting for a decision can be nerve wracking but now there is an app for the iPhone and iPod Touch that makes tracking your application easy and mobile. You can only use the app once your application has been processed but it has many useful features. You can easily see which universities have offered you a place, see if further information is needed on your application and view any replies you’ve made. Find out the key dates in the UCAS calendar and get the answers to your questions in the FAQ section. Unfortunately it doesn't have a teachers tracking facility hyet but maybe that might be something they will look at releasing shortly. Best of all the UCAS app is completely free. To download the UCAS app click here.
Posted by Unknown at 7:50 PM No comments:

What is Twitter? Twitter is a micro blogging social network which allows users write short snappy messages (just 140 characters) which then appear on the user's profile page (Click here to see mine). Users follow other people on Twitter who may be friends or have similar interests. Sounds kinda pointless until you see how tweets can allow you share resources, web-links, videos, photos, interesting stories or classroom tips. It's an excellent way to expand your view on how your subject can be taught and to connect with other teachers from around the world. I would go as far as saying that Twitter is an essential tool for newly qualified teachers. We all know the web is a brilliant resource and Twitter allows you to share the best of the web with like minded people. It is so simple to join and start tweeting. Just visit Twitter.com and get stuck in. You might find it useful to follow these teachers to start connecting: Me, Patricia Donaghy, Julia Thompson, Maryna Badenhorst, Pajo, ScoilNet, Nicole Galante and Julian Girdham (from SCC English) to name but a few. Here are few useful links on how Twitter can help you become a better teacher: here and here.
Read more »
Posted by Unknown at 4:29 PM 1 comment:

More Stress, Less Success is a blog about being a teacher - a busy one. But more specifically it is about recognising the work that teachers do in a society where they are rarely valued. It's also about exploring new ways to teach and learn, specifically using technology. 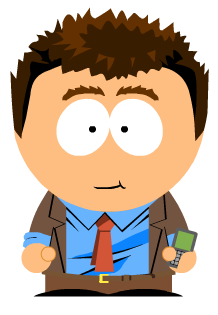 My name is Humphrey Jones, and that's me above (kinda). I am a teacher, a guidance counsellor and a bit of a geek. This blog is about me expressing my opinion on the educational world and doing my bit to help others explore new ways to teach and learn.